Documentum Business Object Framework which was introduced from Documentum 5.3 plays a key role in most of the current Documentum implementations.  Service-based Object is one of the basic members of Documentum BOF family.  Let’s try to see what makes Service Based Objects very popular and how can you implement it.

What is an SBO

In simple terms, SBO in Documentum can be compared to session beans of the J2EE environment.  SBO enable the developers to concentrate just on the business logic, and all the other aspects will be managed for you by the server. This reduces the application code significantly and reduces lots of complexities. The most significant advantage of a BOF that it’s deployed in a central repository. The repository maintains this module and DFC ensures that the latest version of the code is delivered to the client automatically.

Service-Based Objects are repository and object type in-depended that means the Same SBO can be used by multiple Documentum repositories and can It can retrieve and do operations on different object types. SBO’s can also access external resources, for example, a Mail server or an LDAP server. Before the introduction of Documentum Foundation Services, SBO’s were commonly used exposed to expose Documentum web services.

An SBO can call another SBO or by any Type based Objects. (Type Based Objects (TBO) are a different kind of Business Object types which I will explain in a separate study note)

A very simple to understand example for an SBO implementation would be a Zip code Validator. Multiple object types might have Zip code across multiple repositories.  So if this functionality is exposed as an SBO, it can be used by the custom application irrespective of Object types and repositories. This Validator SBO can be used even by different TBO’s for validations.

Here are some bullet points about SBO’s for easy remembering

How to implement an SBO using Composer

The steps to create an SBO are these.

1) Create an interface that extends IDfService define your business method
2) Create the implementation class implement write your business logic, This class should extend DfService and implement the interface defined in Step 1
3) Create a jar file for the created Interface and another jar for the implementation class then create Jar Definitions
4) Create an SBO Module and Deploy your Documentum Archive using Documentum Composer (Application builder for older versions)

Let’s see these steps with an Example SBO Zip Code Setter, I am not covering the steps using application builder here. The screenshots and the notes will give you an insight into how to use Documentum Composer to implement a Service Based Object in Documentum version 6 or above.

Step 1: Create an interface and define your Business method

The first step is to create an interface which will define the business functionality. This interface should extend IDfService interface. The client application will use this interface to instantiate the SBO. 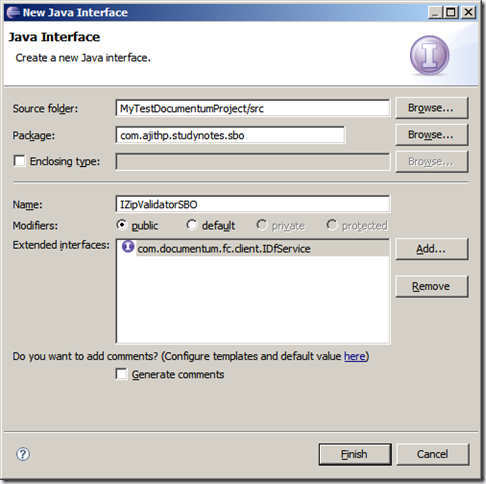 Now Add the Business method ValidateZipCode() to an interface. The code should look like the following.

Let’s see some other important methods of DfService Class before we move further.

Managing repository sessions in SBO As We saw the previous table its always good practice to release the repository session as soon as you are done with its use. So the ideal way to do this should be like this.

Another important thing is to know is how to handle transactions in SBO. Note that only session manager transactions can be used in an SBO. The system will throw an Exception when a session based transaction used within an SBO.

Another important point is if your SBO doesn’t start a transaction don’t commit it or abort it in the SBO Code instead if you want to abort the transaction use setTransactionRollbackOnly() method.

Now let’s see how to code our ZipSetterSBO

Click on New –> Class, Click on the Browse button of Superclass and Search and Select DfService and in the Interfaces search for the Interface created in the previous step and Click OK. Also, select the option Inherited Abstract Methods in Which method stubs would you like to create.

I had overridden method getVersion() for the illustration purpose. See the code sample for the inline comments.

The next step in SBO creation is to create Jar files which will hold the interface and the implementation classes. These jar files are required to deploy your SBO.

Selecting the sbo package to create the interface jar

Selecting the com.ajithp.studynotes.sbo.impl for implementation.

Look at the Composers Export Jar screenshots for Interface and implementation (Refer Eclipse Documentation for more details). I think the figures posted above are self-explanatory.

The Command line to create a Jar file is jar cf <name_of_jar>, Please look at the Java Documentation for more details on switches and options of Jar command.

The creation of Jar Definitions is new step added in Composer. 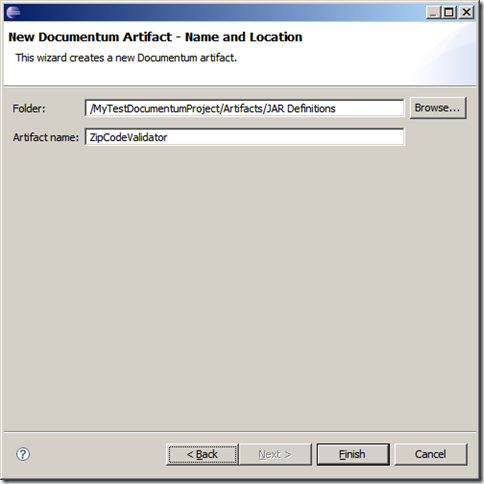 Step 4: Create a Module and Deploy the SBO

In the Module, edit window select SBO from the dropdown

Click on the Select Button near pointing to Class name and Select the implementation class. In this case ZipValidator

Now Click on Add Section of Interface Jars of Core Jars. A new pop up window will appear which will have a list of all the Jar definitions set to Type Interfaces and Interface and Implementation. Select the one you wanted to use for ZipCodeValidatorSBO that is ZipCodeValidator.

For more details of other options refer to Documentum Composer Manual. Save the Module.

Now right click on the project and install the Documentum project

Look at the Documentum composer documentation to know more about the Installation options.

How to use SBO from a Client Application

follow the below steps to instantiate an SBO from a client application.

1) Get the Local client

After a long wait Documentum Composer is out. And its time to say goodbye to Application builder, Application Installer I was really excited to see the composer and believe me it was really user friendly, As expected I could see few errors happening in Error log of the Composer but its working fine. Anyways it looks like a good start. Once you download the Composer and unzip it, make sure that you go to <DocumentumComposer>\plugins\com.emc.ide.external.dfc_1.0.0\documentum.config\dfc.properties add your connection broker information to it.
I created a Aspect using it and deployed it to the Server, The UI of Composer looks pretty much intuitive and easy to use.  I am adding a screenshot of the Composer for people who where waiting to see it. I will be adding more about my composer Experience soon